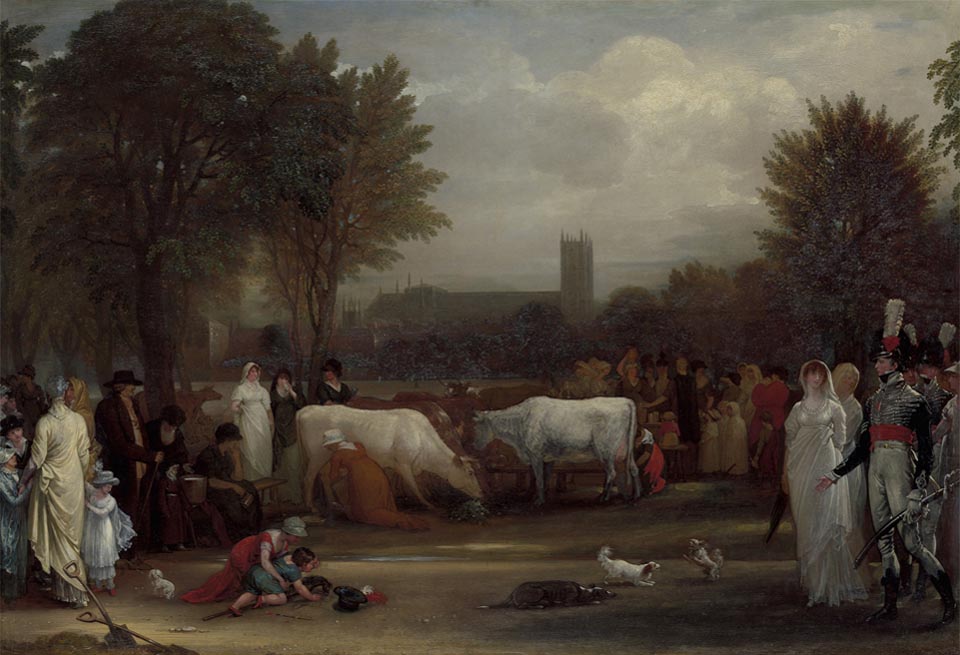 In celebration of the 25th anniversary of the restoration of the State Rooms at Spencer House, James ‘Athenian’ Stuart’s early neo-classical interiors showcase the work of Benjamin West, a central figure in the development of neo-classical painting.

Central to the exhibition is West’s Milkmaids in St. James’s Park, Westminster Abbey Beyond (ca. 1801, oil on panel, Paul Mellon Fund), which is on special loan to the Rothschild Foundation from the Yale Center for British Art.

This rare and important panel painting deals with an uncommon subject in West’s artistic practice; it shows the east area of St James’s Park near Whitehall, overlooked by Spencer House, where milk-maids kept cows from the end of the seventeenth-century. During the eighteenth century it became fashionable to visit the area in the morning to drink milk or syllabub (a mixture of milk and wine). The painting highlights West’s ability to blend landscape and genre painting and his originality in turning a popular event of everyday urban life into a pastoral scene of peace and pleasure. At the same time, West captures the skyline of central London with topographical accuracy, with the outline of Westminster Abbey clearly visible in the background.

The display unites Yale’s recent acquisition with three large history paintings by West, commissioned by George III, on loan to Spencer House from Her Majesty the Queen. Displayed in the Dining Room is West’s famous Death of Wolfe (1771) and its Renaissance and classical parallels The Death of Chevalier Bayard (1772) and The Death of Epaminondas (1773). In addition visitors will be able to see two further West paintings from The Royal Collection, shown in Lady Spencer’s Room, The Family of the King of Armenia before Cyrus (1773) and The Wife of Arminius brought captive to Germanicus (1773).

Milkmaids in St. James’s Park, Westminster Abbey Beyond creates an interesting and illuminating comparison with these works, showing West’s versatility as an artist in demonstrating both his ability to depict historic scenes of heroic bravery and contemporary scenes of daily life in central London.

In his recent book Benjamin West and the Struggle to be Modern (Merrell, London and New York, 2015) Loyd Grossman describes West as ‘one of the most neglected and misunderstood of Britain’s eighteenth-century artists’. West arrived in England from America in 1763 and quickly established himself as the most prominent history painter in England, earning the adulatory nickname the “American Raphael” from the press. By 1768, at the age of 32, he became one of the founding members of the Royal Academy of Arts – to which he was elected President in 1792 – and in 1772 he was appointed Historical Painter to the King.

Note for Editors
Built for the 1st Earl Spencer by John Vardy (1718-1765) and James ‘Athenian’ Stuart (1713-1788) from 1756, Spencer House took ten years to complete. The restoration of the State Rooms at Spencer House was undertaken by RIT Capital Partners Plc under the chairmanship of Lord Rothschild. The House was re-opened to the public in 1991. The collection is managed by The Rothschild Foundation.